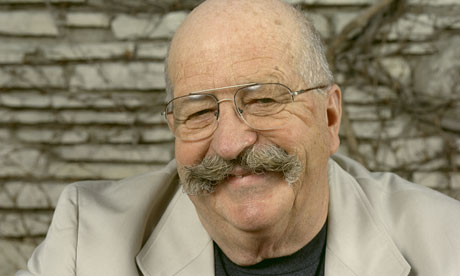 We are saddened to learn of the death of Gene Wolfe. Truly one of the quiet giants of science fiction and fantasy literature, Gene Wolfe’s influence is felt enormously and he is widely admired with many citing him as an inspiration due to the consistent high quality and intense literary achievement of his work.

His first published story was “The Case of the Vanishing Ghost” for The Commentator in November 1951 and since published over 200. His first novel was Operation ARES (1970), but he is perhaps best known for his multi-volume opus the Books of the New Sun, which display an ambition and depth unparalleled. Comprising of three series of novels and other work, they were his main focus for over twenty years. The first The Book of the New Sun is a single contiguous story in four parts and began with The Shadow of the Torturer. Set in a bleak future, it was influenced by Jack Vance’s Dying Earth series, and won critical acclaim.

Gene Wolfe has won the World Fantasy Award for Life Achievement, was inducted into the Science Fiction Hall of Fame, named SFWA’s 29th Grand Master and awarded the Damon Knight Memorial Grand Master Award as well as won fifteen awards including the Nebula, Hugo, BSFA, Campbell, August Derleth and World Fantasy awards. While those are the awards he won, he was also nominated another sixteen times for Nebula awards and eight times for Hugo awards, which he did not win.

Something of a cult figure, Gene Wolfe has thousands of words written about him and analysing his works, in both academic and fan circles. He is a giant of the genre and shall be remembered for many years to come.

Walking in a Winter-of-the-World Wonderland