SF Gateway is delighted to present a guest post from acclaimed fantasy author Michael Scott Rohan, author of the award-winning Winter of the World series.

Everyone said what a good idea it was making Ice the evil force in my Winter of the World books, but it seemed quite natural to me. I grew up slithering up and down neckbreaking Edinburgh hills and across glassy winter parade grounds, where the slightest slip sends your kilt flaring out, leaving you a very direct landing on what lies beneath. No wonder Ice seemed like a primal force. But that’s always given it a terrible fascination, one reason why Deb and I, young sixtysomethings in less than perfect health, recently decided to set off for the wilds of Spitzbergen, now called Svalbard, the last land before the North Pole. 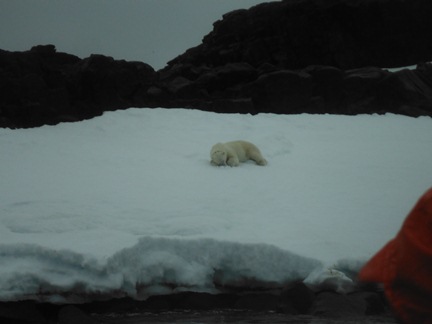 We weren’t totally nuts. Some years back we’d spent time in Antarctica, both its surrounding islands and the mighty mainland itself, and now we thought we’d see what the other end was like. In Antarctica we’d had a great time, hobnobbing with penguins and seals of all species, ducking giant petrels and albatrosses, chasing whales in a storm and finding everything from cathedral-sized icebergs to a miniature Russian Orthodox church, onion domes and all, in the midst of emptiness. And around Cape Horn we’d even discovered our own authentic ghost ship, headed determinedly across our bows with no sails set but rigging intact, flying the Swedish flag — and nobody on board. 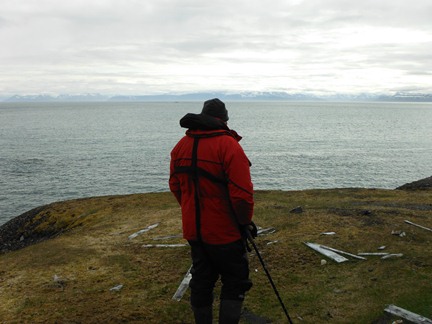 Spitzbergen, for me, was decidedly different. We’d spent spring stewing alive in Savannah, Ga., eyeballing gators (literally –when you realise that all the swamp debris, from the six-inch twig to the twelve-foot trunk, is eyeballing you right back…) so we were quite ready for something fresh and polar. But crisp this wasn’t, and it was ten times as damp. Technically the place is a desert, with almost no fertile soil and minute rainfall, but that doesn’t stop mist hanging in sullen clouds around brown snow-striped hills, glacier-ground into uniform curves. There are a few decent mountains with gleaming snowcaps, but nothing to match the terrifying grandeur of Antarctic’s Lemaire Passage, with its mountain-faces like glistening flints.

In Spitzbergen’s south, in high summer, the hillsides often have a slender coating of moss, sustained by bird and dwarf reindeer output, but it’s like a thin fleece blanket over a bare skeleton; you still stumble over bare boulders beneath. Lower down the bones and shells of ancient life lie exposed, from the Devonian to the Mesozoic, including a vast pliosaur-like monster tentatively named Predator X (recently featured in Primeval). There are plenty of noisy small birds, little auks, guillemots and gulls, but nothing as entertaining as penguins; there are whales – once we saw two kinds at once ahead of our ship, a fin whale and two humpbacks lazily feeding. There are fewer seals than in Antarctica; and there are polar bears, which is why they’re fewer. The bears are not at all scarce, which also meant we couldn’t go anywhere without guide and heavy rifle, another reason I found Spitzbergen constraining. In the far north of the islands, the last solid land, the rocks are stark barren brown, there’s nothing alive out of the water except a few lonely birds, and it’s almost a relief to step out of your zodiac inflatable onto the clean shining icefloes that begin the road to the Pole. 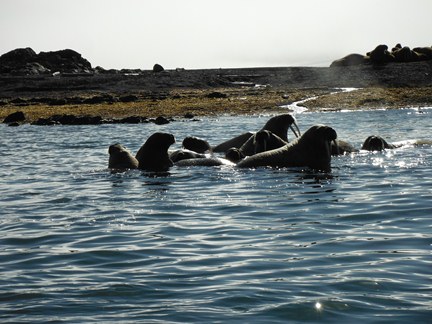 But in between the islands are seamed with glaciers, tall streams of ice flowing straight down between almost every mountain arm into the margins of the sea, filling the bays with tall cliffs, and they often seem the most living objects in the landscape. They have colours, for one thing, which not much else does – an amazing variety, from basic white to light blue, but often shot with veins of green, brown or even grey-black, with sudden small hollows glowing an impossibly vivid dark green or electric blue. In places rivers pour down them, even out of them, spilling down huge waterfalls into the sea at their feet; and there the water often turns a pure turquoise with the minerals they shed – the same colour I’ve seen in lakelets at the foot of melting Alpine glaciers. In your little zodiac inflatable dinghy there are no seats or even gunwales as such; you’re perched awkwardly on the round rubber side, with your protruding backside literally lapped at by that chill water. You soon find out it’s so thick with ice particles of all sizes that near the glacier foot it’s like sailing through a slushy. 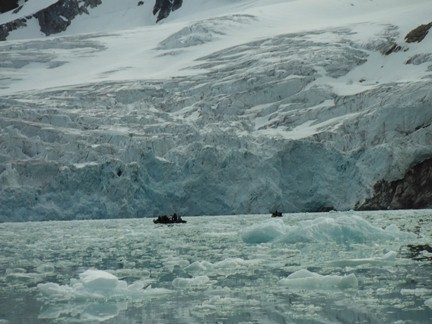 And there are sounds, underlying the constant rush of the wind and the thin seabird cries – like thunder, but there’s no storm. That also we remembered from Antarctica; but it was further away then. Mostly it’s quite distant, hard to place, rumbling and crackling around the still bay, glancing off the glittering walls; but every so often it sounds nearer, and you glance around a little nervously, to find everyone else in the boat doing the same. But after a while they don’t seem so important; the lone Bearded Seal balanced on a small ice floe, looking very much like a glossy Crombie’s Best sausage some ten feet long, is much more interesting. He blinks liquidly at us, innocent and unconcerned, and we drift idly along the current, while our helmsman yarns about how when he was young he took his boat a bit too close to a glacier cliff, and –

The thunder is suddenly shattering the air overhead, like a glacier’s shout of rage; and with godlike force, very fast yet somehow unhurried, the expanse of ice-face no more than twenty feet beyond our bows detaches itself and falls. Not forward, or I wouldn’t be writing this; instead some eighty feet of ice slides down vertically into the mirror face of the bay. You’d expect a crashing tidal wave, a foaming wall of water. Nothing of the sort; even that vast mass of ice is too little to disturb the ice-thickened water. Instead the mirror heaves up, vastly, into a slow-motion ripple, nearly ten feet high, spreading outwards with unstoppable slowness, still reflecting perfectly, followed by more glutinous ripples — like a pebble in a pool, in slow motion.

Our helmsman, acting out his own story, hurls the boat around into the oncoming wave. It picks us up casually, shakes us and bounces us onto the next ripple. We cling on frantically to the gunwale lines, bouncing outward and then in towards one another, trying not to bang heads. I make sure Deb’s still attached, but with her lower centre of gravity she’s about the securest of us.

The ripples subside. The boat returns to a wobbly level. We slump inwards, some of us onto the zodiac’s metal floor.

A little voice pipes up. “Er – anyone get a picture of that?”

There’s always one. A number of answers occur, best suppressed. “You really think we’ll need a picture to remember that?”

The other zodiac has turned to see if we need help. The seal is nearer, but he isn’t bothered. He simply turns away with a resounding snort that makes his whiskers quiver. He’s right; the bay’s calm, sun’s bright, sea glassy, no trace of the cataclysm. We realise that in truth it was a very minor fall, not even unusual for the day; yet to us it seemed shattering, and could so easily have been. This is the Ice, the power that grinds down mountains, gouges valleys, scours whole landscapes clean. As a mere tourist you tread on its doorstep with infinite care. And I’m just thankful it can’t read. 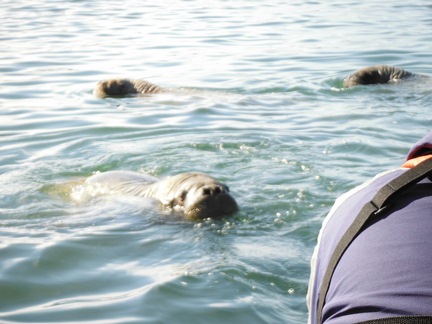 Michael Scott Rohan’s books are available as eBooks from SF Gateway. His acclaimed Winter of the World series comprises: