Back in the ’50s, when novels could be 40,000 words long and the pulps ruled the world, publishing was a very different beast than it is now.  Dozens of short, purpose-written books were published out each month, in popular genres such as Romance, Crime, War Stories, Westerns and, of course, Science Fiction. The writers for these pulps would churn out stories at prodigious rates, to be published under house names for a set fee, with the copyright owned by the publisher. Many a fine SF writer got their start writing these work-for-hire books but, in return for the regular pay cheque, they were subject to the whims of their employers.

One of these whims involved approaching the production process in a slightly idiosyncratic manner – take, for instance, E. C. Tubb’s first novel, Saturn Patrol. This is the story the way we heard it:

Tubb had written a space adventure to be published under the Curtis Warren house name King Lang. The publisher wanted to call it ‘Saturn Patrol’, but that was news to Tubb. He pointed out that the story didn’t take place anywhere near Saturn – the ringed planet didn’t even feature.

‘That’s too bad, because I’ve already had the cover printed. Look: Saturn Patrol.’ 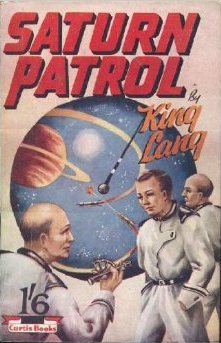 So Tubb did the only thing he could think of that didn’t involve writing a whole new story (and losing both time and money as a consequence). He went back to his story and added a line to the second paragraph:

The ship stood like a dirty finger, poised on the landing field at the edge of town. Once sleek sides were marked and scarred, stained with tarnish and mottled with poorly applied patches. One fin was twisted, and the plastic of ports and turrets clouded with flight strain and neglect. Yet, despite the general air of decay, something of the original beauty still showed. The clean, utilitarian lines of a perfect machine in the long curves, the subtle swellings of the venturis could still be seen.
Gregg Harmond, who had once served on many a fine spaceship in the now defunct Saturn Patrol, could see it. He thought now: “It’s the loveliest thing ever made.”

Saturn Patrol is our New Book of the Week. You can find more of E. C. Tubb’s work via his Author page on the SF Gateway website and read about him in his entry in The Encyclopedia of Science Fiction.

On This Day: John Glasby Died

On This Day: Walter B. Gibson Died

On This Day: E C Tubb was born

On This Day: Edgar Rice Burroughs