This week’s SF Masterwork of the Week, Greg Bear’s Blood Music is, among many other things, one of the earliest – and still one of the finest – exemplars of biopunk. To introduce you to this extraordinary work, we’re delighted that our good friends at SFX, the UK’s premier SF entertainment magazine, have kindly allowed us to republish this article from their excellent SFX Book Club feature. Our guide through the veins and arteries of this masterpiece of modern SF is a writer who has made his own not-inconsiderable contribution to the ethical dilemmas of modern medicine, the redoubtable Ken MacLeod. . .

Brian Aldiss once characterised good SF as not so much ‘What if…’ as ‘My God! What if…’ and Blood Music is firmly in that category. 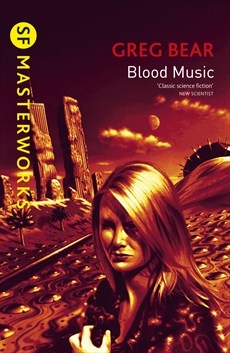 Blood Music starts small, then escalates. “Where Small Things Make Big Changes” is a company motto we’re shown in the opening paragraph. The book follows that slogan. Vergil Ulam, a nerdy 32-year-old scientist, is developing biochips for Genetron. Biochips are cell cultures integrated with microprocessors. The company foresees medical applications, but Vergil has bigger ideas: rather than interfacing cells with silicon, he secretly takes advantage of the computational features of DNA itself. In his test-tubes, modified cells have begun to link up and act in unexpected ways, becoming as smart as rats. Just before Vergil is ready to take his results to another company, his employer finds out. Rather than destroy his cell cultures, Vergil smuggles out a sample – modified from his own blood cells – the only way he can. He injects them.

By now, the tiny cell-clusters in his blood are thinking for themselves. Cool idea. Before long, they’re reshaping everything from his backbone to his eating habits. Cooler. They start communicating with him. Way cool. They spread to other people, through Vergil’s sweaty palms. An old friend murders Ulam – compassionately, but too late: he himself is  infected, then his wife, then… The transformation of almost every living thing in North America into sheets and spires of colourful gunk, inhabited by trillions upon trillions of  intelligent beings, ineluctably follows.

The vision of a transformed continent recalls some of JG Ballard’s catastrophe novels. The dawning enlightenment of a hitherto slow-witted individual, who now stands on the same level as the bewildered reader, parallels a similar device in Poul Anderson’s Brain Wave. As we follow events through the eyes of one character who understands some of what’s going on, and a rare survivor of the transformation who doesn’t, we find that the personalities of the 200 million humans have not just been absorbed. They have been replicated among those trillions of intelligent beings.

The action goes beyond biology to physics, even to metaphysics. The reader is still swept along, like a cell in an artery. The scale expands, and goes on expanding, to a slingshot ending. We fall back, and out, changed ourselves.

Bear says that the idea for Blood Music was first sparked by an article on biochips in a 1982 issue of New Scientist: “That led to a cascade of thoughts, and the conclusion that DNA must be in some sense computational – a fairly radical idea at the time, old hat today.”

The novel is set… round about now, actually. The computer boom is over, the biotech boom just beginning. This canny foresight clashes with other aspects of Bear’s early 21st-century: the USSR and the World Trade Center still stand. There are no mobile phones. What we know as PCs are “VTRs” – networked terminals. None of this matters. The book reads fresh.

The Golden Age editor John W Campbell said that what SF should do is “Ask the next question”. In its persistence in asking the next question, in matching every raised stake, Blood Music has few equals. Bear’s breakthrough book, it came at a moment when SF needed breakthroughs, and got them. 1985 was also the year of William Gibson’s Neuromancer. Bruce Sterling hailed Blood Music, too, as cyberpunk. The connection is there, in the then radical idea that a new future was beginning right in front of our noses, one that SF had hitherto overlooked. It pointed more, however, to the new rise of Hard SF, whose engines had been relit by Stephen Baxter, Gregory Benford and others. The book also foreshadowed the kind of heady, ripped-from-the-lab-notes stuff we soon saw from Greg Egan.

Bear has gone on to explore the idea that “DNA is a self-organising cybernetic system – a kind of neural network” in such works as Darwin’s Radio and Darwin’s Children (which are – there’s a clue in the titles – about evolution). Independent thinking, about radical implications that scientists may fight shy of drawing themselves, is a valid but underused privilege of SF. In Blood Music, Bear shows how that “cascade of thoughts” can take us well beyond where we expect – and that a world where humans, as we know them, have no niche can also be one in which (in the words of the book) “nothing is lost”. It’s one of SF’s great visions of transcendence.

Blood Music is available as an SF Masterworks paperback and an SF Gateway eBook. You can find more of Greg Bear’s books at his author page on the SF Gateway website, and read more about him in his entry in The Encyclopedia of Science Fiction.

This piece was written by Ken MacLeod and appears courtesy of SFX magazine, where it was originally published as part of their regular SFX Book Club feature.  You can subscribe to SFX magazine here and find more Book Club articles here.

Ken MacLeod’s latest novel is the acclaimed SF conspiracy thriller, Descent, which is available in hardback and as an eBook. Ken MacLeod blogs at The Early Days of a Better Nation, tweets as @amendlocke, and you can read more about him in his entry in The Encyclopedia of Science Fiction.