You need to read Orphans because you’re a fan of new space opera and you’re looking for something a bit out of the ordinary.

How many space operas start with a guy taking a bath? How many create an entirely new set of standard units of measurement? How many feature no less than ten versions of one of the lead characters? How many contain aliens that don’t only come from another universe, but have a backward arrow of time as well?

‘Spoilers!’ you say. Yes, but only mild ones, honest, compared to some of the big ones we could mention. As Locus says:

[T]he book can’t be discussed or even described without spoiling some of the surprises, which are mutually reinforcing as well as juicy in themselves. I will, however, give in to the temptation to drop a few more of the names that came to mind as I was reading: the Three Gregs (Bear, Benford, Egan), Linda Nagata, and Frederik Pohl.

That’s another terrific check-list of greats (and not even late ones, this time). You want more? Says VOYA:

This book is true hard science fiction . . . [which] places the novel within the long tradition of Anderson, Asimov, Brin, and Clarke

When Paul di Filippo declares the authors the ‘Niven & Pournelle for the 21st century’, you’re know they’re really onto something. 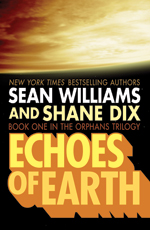 The back-story: Sean and Shane didn’t give up on the idea of writing Star Wars-style space stories after Evergence. But seeing they were actually writing Star Wars stories by then (The Old Republic: Force Heretic trilogy) they felt empowered to try something different. Something with hard science rather than soft, including extreme extrasolar planets (years before any were discovered) and a brand new answer to the Fermi paradox. It features a means of exploring our neighbouring stars that io9 recently wrote up as a super neat idea. Orphans starts off as space opera set much closer to home than Evergence – disturbingly close, at times – and involving people very much like ourselves, i.e. damaged and messed up and making bad decisions even when they’re trying their level best not to. That’s what it starts off as, but it soon evolves into something totally out there.

Orphans is based on Sean’s novella ‘Evermore’, which was reprinted in a Gardner Dozois Year’s Best and is available in spoken word here. It put its authors firmly on the New Space Opera map. But it was no exercise in cerebral naval-gazing. Like Evergence before it, Orphans was a best-selling, award-winning series because it also contains humongous explosions, bad-ass spaceships and an ever-expanding scale – scales of plot, of setting, and of personal stakes. Orphans is Evergence with a high concept strapped onboard and everything turned up a notch. Two notches. Did I mention the race of alien scavengers with two penises? Or the spherical void ships that Doctor Who totally ripped off? (Not really, but Orphans did come first.)

Orphans holds humanity up to the mirror of a vast scary universe and asks the question: ‘Are we really up for this?’ The answer is yes, we’re so bad-ass, but it’s a close call. Find out just how close here and here and . . . well, you know how to do this. Read them and confront the infinite right in the face.

Echoes of Earth is a dazzling adventure, sweeping the reader along from marvel to wonder, and it includes one of the most heart-stopping moments I’ve encountered in a novel in years. ~ Jack McDevitt

The good people at Ace [and SF Gateway! – Ed.] forgot to add this warning, so let me insert it here: For your own safety, strap yourself in with every seatbelt at your disposal. You’re headed on a trip through space and time that could easily leave you far behind if you aren’t ready . . . Hold your breath and hold on tight. This is going to be a ride such as you’ve never seen before. ~ SF Site

You can read more about Sean Williams and Shane Dix in their author entries at The Encyclopedia of Science Fiction.

You can find more books by Sean Williams and Shane Dix on their author pages at the SF Gateway.

And, as a service to our North American readers, Sean and Shane’s eBooks are available from their excellent US publisher, E-Reads.

From the Archives: Greg Bear’s EON: A Review by Stephen Baxter

From the Archives: Why Should I Read Geodesica by Sean Williams & Shane Dix?

From the Archives: Why Should I Read Orphans by Sean Williams & Shane Dix?

From the Archives: Why Should I Read Evergence by Sean Williams & Shane Dix?

Why Should I Read GEODESICA by Sean Williams and Shane Dix?