Nothing reminds me that we’re living in the future quite as much as writing a sentence like ‘I read Darwinia towards the end of last century’.  Sure, I know the 21st century is only a dozen years old but it still sounds kind of . . . epochal.  And I don’t want to hear any millennial dissent about it being thirteen years old.  A century is one hundred years long and, since there was no Year Zero, the last year of the 1st century was 100 AD; it therefore follows that the last year of the 20th century was 2000 AD, and that the 21st century began on 1st January, 2001. So there. 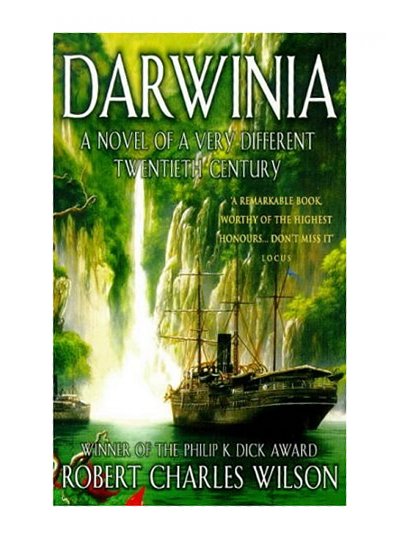 Sorry about that: pet peeve</rant>.

So. I read Darwinia towards the end of last century (don’t start with me). I didn’t set out to read it – had seen no reviews, heard no word of mouth – but the cover looked interesting, and the copy intrigued me:

In 1912 the world changes overnight. Europe and all its inhabitants disappear, replaced by a primeval continent which becomes known as Darwinia: a strange land in which evolution has followed a different path.

What begins as an expertly executed Edgar Rice Burroughs or Arthur Conan Doyle-style expedition into the unknown becomes something much more. At the heart of the mystery is an uncanny spiritualist, whose talents reflect the credence given such practices at the time (not least by Doyle, himself) and lead us eventually into a far greater mystery than the ‘mere’ disappearance of an entire continent.

I thought the story more than lived up to the packaging – as, evidently, did a good number of other people as it was shortlisted for the Hugo Award for best novel.   Wilson was shortlisted again three years later with The Chronoliths (which won the John W Campbell Award) and went on to win the coveted rocket ship trophy in 2006 with Spin. Anyone looking for the sort of high concept SF that used to be the lifeblood of the genre could do a lot worse than explore the works of Robert Charles Wilson.