Norman Spinrad is the acclaimed author of Bug Jack Barron and The Iron Dream, and was an important figure in the New Wave. In this piece, originally posted on the author’s website and republished here with his kind permission, he offers a personal view on the digital publishing revolution in general, and Science Fiction in particular . . .

There are now many ebook readers competing with each other for hardware dominance, and while none of them are quite yet the universal ebook reader capable of dealing with all ebook formats, they’ve arrived at the point where the technology and cost is no longer an obstacle. And with one enormous exception, ePub is emerging as a universal ebook format.

But that enormous exception is Amazon’s proprietary mobi format and Amazon utterly dominates ebook sales. This is bad news for the makers of all those more open format ebook readers, since Amazon’s business model, emulating what Apple did with the iPod and the iTunes store, is to tie its Kindle ebook reader to its proprietary format and its way out in front number of ebook titles to create as close a thing to a vertical monopoly as it can get, about 75% or more of ebook sales in the United States.

On the other hand, this might be good news for writers because Amazon allows anyone to self publish ebooks on their site, set the price within certain limits, and keep 70% of the gross, and Barnes & Noble has followed the leader. More good news for writers is that there are now several freeware programs that will transform word processor output in doc or word or rtf or pdf into ePub or mobi.

So I’ve been experimenting with self publishing my out of print backlist books on Amazon and Barnes & Noble plus a few originals like an unpublished short story, an original short story collection, a collection of my critical essays in Asimov’s Science Fiction Magazine, something over 20 titles in all, long enough to see the results over a good sampling of time.

The bad news is that I’m netting hundreds of dollars a month, not thousands by self-publishing my backlist. But the good news is that most of my backlist books are now available to interested readers as ebooks and at reasonable prices and always will be unless I decide otherwise. And this is good news indeed because, given limited rack space in book stores versus the number of new books published each year, the chances of getting a backlist of such magnitude back into paper print, let alone keeping it there forever, are slim and none.

So, since 70% of something is a lot more than 100% of nothing, this is good news for authors and also for would-be readers, since by eliminating the rack space problem and reprinting costs it allows authors to immortalize our backlists for as long as the grass shall grow and the rivers flow. Now any book that anyone wants to immortalize will be available to anyone who wants to read it forever. For decades now, writers have been bemoaning the disappearance of their backlists, and now, however much or little money they may garner, that sad story is happily over.

But traditional ink and paper publishers are demanding control of ebook rights and 75% of the net and are mostly making this a deal-breaker. So if you can’t give them ebook rights, you can’t get them to publish the books in question in ink-and-paper format. On the other hand, if you self-publish on Amazon and/or Barnes & Noble only, you can pull the ebooks in minutes if that’s what stands in the way of a conventional deal.

But beware of small “ebook publishers” because they are really aggregators. For a percentages of the net that varies, they will create the ebooks from files or sometimes even by scanning books if need be, and in the various necessary formats, and distribute them to retail sites, not only Amazon and Barnes & Noble but the minor sites too.

This is a valuable service, and some PR may be part of it out of self-interest, and if this sounds like what conventional publishers are supposed to do, that’s because it is. And having such a company doing it for you instead of having to do it all yourself is not only a big plus, but by reaching more retailers, may gain you more money than self-publishing in the end by increased sales making up for reduced royalty percentages, which are still better than the 25% of ebook net you get from conventional publishers.

If it works. So when Reanimus expressed interest, I decided to give it a try with THE LAST HURRAH OF THE GOLDEN HORDE and BUG JACK BARRON. The full results are not yet in, but so far the sales are about the same as for say THE IRON DREAM or MEXICA which I self-published on Amazon and Barnes & Noble.

But there’s a catch. Even though the contract allows me to revert these rights more or less upon request, in practice it’s another matter, because there’s no practical way to free them from that multitude of minor retail sites, so in the short term at least, it would seem to preclude any volume publication.

In the medium term, however, the ebook tail is already beginning to wag the ink-and-paper dog, and sooner or later, and I think even sooner than the conventional publishers fear, ebook income is going to become more important than paper book income, and these publishers will have to either up the ebook royalty percentage they pay authors, or allow them to separate ebook rights from volume rights. And when ebook publishers begin paying competitive advances, the ball game will be over.

They are paying small but significant advances. And what they are acquiring is separate ebook rights, not including volume rights, though they have right of first refusal on them, and, via the Gollancz imprint, the ability to publish ink-and-paper editions. Initially at least, they had seemed to be acquiring world English language ebook rights from British authors and only requiring separate US ebook rights from American authors. 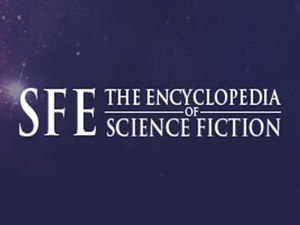 But there’s a huge kicker here, an advantage that can only apply to SF titles. First as a paper-and-ink book, and then on CD as well, SF has enjoyed a resource called THE ENCYCLOPEDIA OF SCIENCE FICTION, which is exactly what the titles says it is. And now Gollancz has taken an updated third edition and are putting it online with free unpaid access.

What is more, there are entries for virtually all authors of significance in the entire history of the genre, and each essay has links to every title to which they have ebook rights so that the reader can click to buy more or less instantly.

I have been saying that if publishers want writers to accept 25% cuts on ebook net instead of the 70% possible via self-publication, they have to pay advances and offer marketing services that will increase sales volume. And that is what Orion is certainly doing.

Malcolm Edwards, in charge of the project, initially offered to acquire separate British ebook rights to 18 of my backlist titles, and I accepted. This required me to remove availability for sale of the ones I had self-published from Amazon UK and Barnes & Noble, which were the only retail sites where they were available. But checking on some of the titles in my encyclopedia entry, I saw that while they were available on Amazon UK, they were, of course, not available directly on Amazon US, though the self-published versions still were.

So why not offer the US ebook rights to Orion? In other words, for another small advance, give Orion world English language ebook rights? After all, free access to THE ENCYCLOPEDIA OF SCIENCE FICTION is world-wide, not limited to people in the British rights area. And what is more, that would in effect include Open Market rights too. So anyone anywhere in the world could read my entry in the encyclopedia, and click on any title there to buy it. And checking on Gateway, I saw that there were already links to retail sites in non-Anglophone countries all over the world.

This time, I made the suggestion to Malcolm, and he accepted. So I’m removing all the books to which Orion now has ebook rights from Amazon and Barnes & Noble. Orion has thus far published something like 1000 titles, and their ultimate goal is to be as definitive as possible, so they’re publishing stepwise, not about to do everything at once, so my self-published versions of those ebooks will disappear for a while but reappear as Orion ebook titles, not just on Amazon, but on diverse retail sites all over the world.

Thus far, Orion ebooks have already published and made available worldwide THE MEN IN THE JUNGLE, AGENT OF CHAOS, and THE VOID CAPTAIN’S TALE, which have replaced my self-published versions on Amazon, as well as first ebook editions of THE SOLARIANS, SONGS FROM THE STARS, A WORLD BETWEEN, THE STAR-SPANGLED FUTURE, and NO DIRECTION HOME.

Soon to come: THE IRON DREAM, CHILD OF FORTUNE, LITTLE HEROES, RUSSIAN SPRING, PICTURES AT 11, JOURNALS OF THE PLAGUE YEARS, GREENHOUSE SUMMER, OTHER AMERICAS, DEUS X AND OTHER STORIES, and SCIENCE FICTION IN THE REAL WORLD.

All of the above on Amazon world-wide directly, or via my Gateway entry, from many other worldwide sources as well.

On This Day: Virginia Kidd