As regular readers of the SF Gateway blog will know, our good friends at SFX have kindly agreed to allow us to republish those articles from their SFX Book Club that relate to our SF Masterworks and/or SF Gateway titles. This week, the perceptive Ian Berriman, Reviews Editor at SFX, takes us through the godfather of alien invasion novels, The War of the Worlds . . .

No-one would have believed in the early years of the 1880s that a lowly draper’s assistant would transform literature, writing novels which, over a century later, would still be inspiring multimillion dollar motion pictures. But that’s exactly what became of Herbert George Wells.

Between 1895 and 1901, with an extraordinary run of “scientific romances”, Wells created modern science fiction. This tale of Martian tripods wreaking havoc in the home counties is the finest of them all. 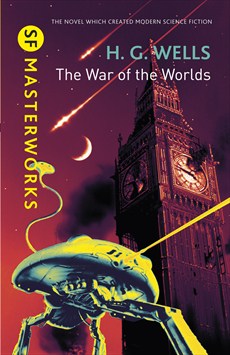 Authors had speculated about Martian life before, of course, and narratives of future war were common at the time – books like George Chesney’s The Battle of Dorking (1871), which recounts a German invasion of England commencing just 16 miles north-west of Wells’s Woking. The inspiration for combining Martians and war sprang from Wells’s brother Frank. “We were walking together through some particularly peaceful Surrey scenery”, Wells later recalled. “’Suppose some beings from another planet were to drop out of the sky suddenly,’ said he, ‘and begin laying about them here!’… That was the point of departure.”

Naturally, Wells’s novel reflects contemporary concerns. His depiction of the Martians, for example, is influenced by his interest in evolutionary theory (Wells was taught biology by outspoken Darwinist TH Huxley, and called it “the most educational year of my life”). This informs his depiction of the Martians as “heads – merely heads” whose other organs have mostly withered away. Wells predicted mankind following a similar evolutionary path, and wrote an essay on the subject in 1893: “The Man of the Year Million”. These monstrous grotesques with their fleshy beaks and glistening tentacles have inspired countless outlandish BEMs; the Daleks, hideous mutants enclosed in battle machines, are faint echoes.

British colonialism also intrudes into the novel, with the Martian attack giving Wells’s comfortably-off readers the chance to imaginatively experience what it’s like to be on the sharp end of imperialism – indeed, Wells explicitly compares the Martians’ treatment of humanity to the extermination of the natives of Tasmania by Europeans. He also repeatedly compares humanity to lowly animals – rats, wasps, ants and so on. In both cases, his aim is to force a change of perspective upon his audience. We are not necessarily the pinnacle of creation; in the overall scale of things we are microscopic, insignificant.  With its powerless, passive narrator, this is not a tale of heroism – unlike American writer Garrett P Servis’s 1898 sequel, Edison’s Conquest of Mars, in which the famed inventor takes the fight to Mars! Servis’s typically American tale of heroic individualism spectacularly misses the point. A century later, Independence Day did the same. One can easily imagine Wells sighing at its jingoistic triumphalism.

Over a century after it was written, The War of the Worlds still thrills. For a product of a supposedly genteel age it is surprisingly ferocious: littered with contorted corpses, charred and dogbitten; suffused with the smell of burnt meat. It’s pacey, often achieving the breathless, quick-cut urgency of news reportage. Most of all, it has verisimilitude in spades. Wells once wrote, “as soon as the magic trick has been done, the whole business of the fantasy writer is to keep everything else human and real”. So the fabulous is firmly grounded in the drab, suburban reality of Wells’s home turf. In a letter of the time, he wrote gleefully of riding around the area on his bicycle, hunting for locations: “I completely wreck and destroy Woking – killing my neighbours in painful and eccentric ways.”

Perhaps the most powerful passages concern what Wells calls the “swift liquefaction of the social body” – the rapid descent of civilisation into a savage, dirty mob, with people rushed underfoot as panicking Londoners flee from the Martians’ Death Rays and poisonous Black Smoke. Written in an age before weapons of mass destruction, these pages seem to predict countless terrors to come, from mustard gas to the A-bomb. Today, they resonate with modern fears of dirty bombs and sarin gas. In fifty years time, when people live in fear of horrors as yet unknown, The War of the Worlds will still speak to people’s primal fears. It’s a wake-up call ringing through the decades, shaking us out of our complacency, reminding us that our way of life is fragile, and believing otherwise is hubris.

The War of the Worlds is available as an SF Masterworks hardback. You can read about H G Wells in his entry in The Encyclopedia of Science Fiction.

This piece was written by Ian Berriman and appears courtesy of SFX magazine, where it was originally published as part of their regular SFX Book Club feature. You can subscribe to SFX magazine here and find more Book Club articles here.