And so we move on to Simon’s selection of favourite Masterworks and, like Marcus, there’s too much classicy goodness there for him to restrict himself to just one choice . . .

Why Viriconium? Well I could just say that, sentence for sentence, there is no better writer of prose in English working today than Mike Harrison and leave it at that. It’s reason enough for me. But let me elaborate. Our Viriconium volume is a collection of short novels and stories about the greatest fantasy city, the greatest city, there has ever been; Viriconium. The novels and stories can be read in any order. Just as the parts of Viriconium rest against each other restlessly (there is, and can never be, no map of the city), just as its pasts and futures are elastic. Viriconium could be in the far future or the deep past. It could be today or last week. It has even swapped, briefly, with London. The people who live in Viriconium lead lives both ordinary and baroque, there are terrors and pleasures in both. There is a court, Mammy Vooley rules some of the time, gangs run the streets whistling their messages to each other, there are painters, there is a dwarf, there is a plague, there is a war. Viriconium shifts around you. Its beautifully described streets and buildings have come from many times. It takes you round corners into different parts of the fantastic. It gives you surprising perspectives on their vistas. It will pull you in and love you and mug you. You can make a brief visit or you can read endlessly, finding something different every time. Reading Viriconium is like living in a city. It’s yours, it’s personal, it changes, it changes you. 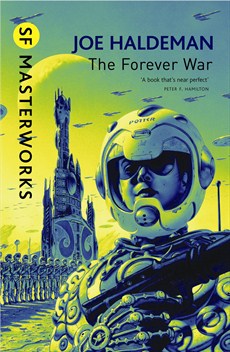 No SF novel has changed the way I think quite the way that Haldeman’s extraordinary book. I’m very interested in military history; in trying to understand what takes people to war, how it changes them, how they fight, why they fight, what waits for them when they come back, how the society they fight for will feel for them. Keegan’s The Face of Battle, Richard Holmes’ The Firing Line, Michael Herr’s Dispatches, Sebastian Junger’s War, Tim O’Brien’s If I should Die in a Combat Zone, Graves’ Goodbye to All That; all remarkable non-fiction works that look at all those questions. But the book that first made me REALLY think about all those questions, really punched me in the gut about the real terrors of war (not always the ones on the battlefield) was Haldeman’s SF novel. Influenced by his experiences in Vietnam, Haldeman used the weapons of SF (vast distances, terrifying tech, the brutality of time dilation) to hammer home the realities of war; the realities that come home: trauma, alienation, guilt, and all the other footsoldiers of PTSD as experienced by soldiers and the societies they fight for. And all via vivid, brilliantly described, awe-inspiring space-battles and terrifying actions on planetary surfaces. In many ways the book acts as a corrective to Heinlein’s Starship Troopers. Both feature utterly alien aliens, power-armour, unimaginably violent weapons but each attains a very different effect.

I read both when I was fourteen, Troopers first, War second. It was Haldeman’s book that turned me into a pacifist. I can’t think of another single book that has had such a profound effect on my thinking. But the real power of The Forever War comes from just how well written it is. Its elegant, supremely effective prose draws you in, it excites you, it terrifies you. It introduces absurdities with a sly straight face. It’s only once you calm down that you realise you’ve been allowed to think and see things very clearly.