If we don’t defend ourselves from Godzilla now, what will become of us?

In 1954, a legend was born. Well, technically it was resurrected, but we’ll get on to that later. Directed by Ishiro Honda, and costing ten times as much as the average feature film, Gojira (Godzilla to us) was Japan’s first attempt at big budget science fiction. With a monster that would enter the lexicon of popular culture, sixty years of sequels and remakes, and the spawning of an entirely new genre: the kaiju eiga (Japanese monster movie), I think it’s fair to say that their ‘attempt’ was a successful one.

When a Japanese fishing boat is destroyed near Odo Island, paleontologist Kyohei Yamane (Takashi Shimura) leads an investigation crew to the island, where giant radioactive footprints are discovered. An alarm rings and Dr. Yamane and the villagers encounter Godzilla, an ancient sea creature that has been resurrected by repeated nuclear tests. Fearing an attack on their homeland, Government officials appeal to the doctor for ideas to kill the monster, but Yamane wants him kept alive and studied. When Godzilla surfaces from Tokyo Bay and attacks the city, Yamane is forced to take drastic measures to destroy the beast. 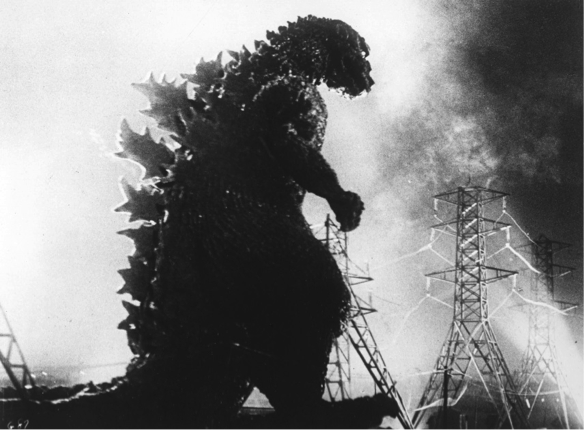 “It’s impossible! Godzilla absorbed massive amounts of atomic radiation and yet it still survived! What do you think could kill it?”

In 1956 the film was sold to an American distributor (Jewell Enterprises), who cut a whopping 30 minutes out, dubbed it into English, and re-titled it Godzilla: King of the Monsters! New scenes were added starring Raymond Burr as an American reporter observing the monsters rampage from the side-lines. All trace of the anti-nuclear message was excised. For many years, this US version of the film was, for many people, thought to be the original. It was only in 2004 when the complete and uncut Japanese Godzilla was re-released that audiences were finally given the opportunity to see the authentic article.

In the 60 years since Godzilla was released, Toho Studios (the Japanese film company responsible for the franchise) produced over 25 sequels in which Godzilla meets, battles and sometimes even befriends a host of different kaiju, including fan favourites such as Mothra, Rodan and King Ghidora. An awful 1998 US remake has recently been shown up as the travesty that it is by a particularly fresh and faithful 2014 reboot from Monsters director Gareth Edwards, in which Godzilla awakes to save the world from two giant radiation-eating creatures known as MUTOs. 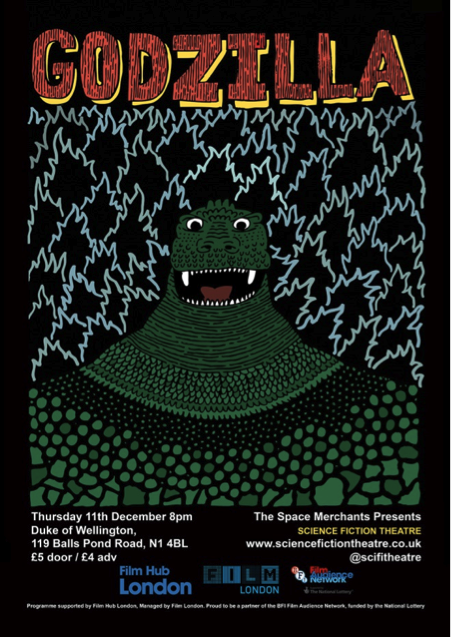 The latest Godzilla film is impressive, but it’s not a patch on the original. Celebrating its 60th birthday this year, Gojira/Godzilla is still an incredibly poignant film, and a fierce indictment of the atomic age. A behemoth of a film (in scope of production as well as name), it is a mesmerising depiction of widespread destruction and human despair that had never been seen in cinema before.

Science Fiction Theatre is a London-based monthly film club run by The Space Merchants, purveyors of classic SF in all its guises. Godzilla will be screened at The Duke of Wellington, N1 4BL on Thursday 11th December at 8pm. Tickets are available here.