Gully Foyle is my name
And Terra is my nation.
Deep space is my dwelling space,
The stars my destination.

Current SF Master work of the Week is one of the all-time great works of SF. Among many other claims to fame, it is one of the major precursors of Cyberpunk, a brilliant riff on Dumas‘s The Count of Monte Cristo and the novel that gave The Tomorrow People the term for their teleporting ability. It is The Stars My Destination by Alfred Bester – winner of the first ever Hugo Award for best novel, and here to introduce it, thanks to our good friends at SFX and their excellent Book Club, is the man with more Hugo nominations than anyone in the award’s history: David Langford.

“He was one hundred and seventy days dying and not yet dead. He fought for survival with the passion of a beast in a trap. He was delirious and rotting… ”

Gully Foyle starts at the bottom and claws his way up to become one of science fiction’s strongest anti-heroes. At first a non-entity, a dull space-hand with no future, he’s marooned in deep space amid the wreckage of his ship, Nomad. Foyle’s transformation begins when the sister craft Vorga appears, ignores a barrage of distress flares, and passes him by. “Vorga, I kill you filthy.” 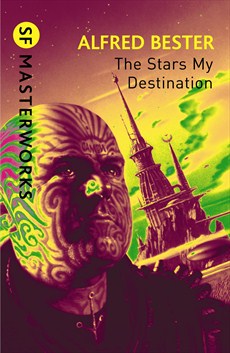 The Stars My Destination is a wildly inventive revenge melodrama, inspired by Alexandre Dumas’s classic The Count of Monte Cristo. Driven by obsession, Foyle rescues himself – after a fashion – and returns, strangely disfigured, to the rich decadence of 25th-century Earth. Society has been transformed by the widespread power to teleport or “jaunte”, and Bester gleefully explores the criminal possibilities.

In a first, bungled vengeance bid, Foyle tries to blow up the docked Vorga and is thrown into an underground prison whose inmates are kept in total darkness (because to teleport, you must know where you are). Like the Count of Monte Cristo in the Chateau d’If, Foyle gets educated while still captive, escapes the escape-proof jail, acquires huge wealth and a title, and begins to plot serious revenge.

In his new identity as “Fourmyle of Ceres” – an upstart dilettante who runs a travelling circus and charms high society with his eccentricity – Foyle tracks down Vorga’s crew for brutal interrogation. He rapes, tortures, kills. He’s had himself rewired as a cyborg commando with hyperaccelerated reflexes, an infernal machine in human form. Like the Count – who learned the trick in prison – he can see in the dark…

Frenzied background activity includes war between the solar system’s Inner Planets and Outer Satellites. Massive OS nuclear attacks on Earth and Mars provide dazzling special effects for key episodes – one of them a love scene. IP Intelligence, OS spies and the merchant-prince owner of Nomad and Vorga are frantically chasing a superweapon called “PyrE”, now in Foyle’s hands; plus a personal secret which Foyle himself doesn’t know.

Bester’s rapid-action plot teems with bizarre characters: a blind woman whose eyes, impossibly, function only in the radio/radar bands. A woman cursed with projective telepathy – everyone can hear her thoughts. A man made lethally radioactive by a nuclear accident – reminding us that Bester once worked in comics, scripting supervillains like Dr Radium. Above all, there’s the enigmatic Burning Man who flickers into existence at crisis-points of Foyle’s adventures, to distract, save, mystify… and vanish. Further eccentrics include the Scientific People, whose religion is a crazy patchwork of technical jargon (“Quant Suff!”), and Cellar Christians practising forbidden worship in safehouses guarded by the Lethal Defense Corporation of Sweden.

What makes this farrago work is the crazy, obsessive tempo of Bester’s writing. In an interview, Bester said he took his pace from music. “I say to myself… I need the attack of Beethoven in the first movement of the Eroica.” He also liked to quote the Hollywood advice, “Start with an earthquake and build to a climax.”

For decades there were two versions of Stars. The UK’s Tiger! Tiger! Appeared first and was edited differently from the US The Stars My Destination. In Britain,

Foyle’s repeated curse became “Vorga, I kill you deadly”, not “filthy”. Some typographic gimmicks vanished from the climactic “synaesthesia” sequence, where Foyle’s senses become cross-wired and he experiences sound as light, colour as pain, touch as taste… Alex and Phyllis Eisenstein edited a best-of-both-versions Stars in 1996 – now the official text worldwide.

Back when SF was often pale and antiseptic, Bester stood out for his enthusiastic vision of life’s seamy side. He invented flash crowds: “Jackjaunters” teleporting into disaster areas to rob and loot. Cyberpunk authors took their cue from the sleaziness of his mean streets. Many others were influenced. Michael Moorcock recently told me: “I would never have started reading SF (as such) if I hadn’t got hold of a second-hand copy of The Stars My Destination in Paris in 1957. Until then, I hadn’t liked anything I’d seen…”

This one really is a classic, and compulsively readable too.

The Stars My Destination is available as an SF Masterworks paperback. You can read more about Alfred Bester in his entry in The Encyclopedia of Science Fiction.

This piece was written by David Langford and appears courtesy of SFX magazine, where it was originally published as part of their regular SFX Book Club feature.  You can subscribe to SFX magazine here and find more Book Club articles here.

In addition to being a serial collector of Hugo Awards, David Langford is a one of the chief editors of The Encyclopedia of Science Fiction, and the author of a number of works of fiction as well as two Discworld quiz books, which can be found via his author page on the SF Gateway website. His multi-award-winning SF news website is Ansible and you can read more about him in his entry in The Encyclopedia of Science Fiction.