This week’s Editors’ Choice is Robert Silverberg‘s wonderful A Time of Changes. 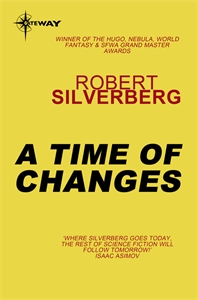 In the far future, humanity has spread across the galaxy to worlds that began as colonies, but now feel like home, each with its own long history of a thousand years or more, and each with its own unique culture. One of the strangest of these is Borthan, where the founding settlers established the Covenant, which teaches that the self is to be despised, and forbids anyone to reveal their innermost thoughts or feelings to another. On Borthan, the filthiest obscenities imaginable are the words ‘I’ and ‘me’, and for the heinous crime of ‘self-baring’, apostates have always paid with exile or death.

But after his eyes are opened by a visitor from Earth, Kinnall Darival, prince of Salla, risks everything to teach his people the real meaning of being human, beginning his account with the vilest of heresies:

Winner of the Nebula Award for best novel, A Time of Changes was published during a particularly vibrant period of Silverberg’s career – a point at which he had a serious claim to being the best SF writer in the world.

Hyperbole? Maybe, but just look at this:

Title Spotlight: The Unreal and the Real Vol 2