We continue our spotlight on authors whose Gateway offering has been expanded as a result of recent integration of classic SFF titles from across the Hachette Group of publishers, and the standard is, frankly, ridiculously high, as can be seen (again) from today’s author.

If you want to judge a writers work by quality, then place a tick here. Importance? Tick. Versatility? Tick. Courage? Tick. Conscience? Tick. In fact, rather than list every desirable quality in a book (and tick them all), let’s just say that whatever standard one cares to set, the great Ursula K. Le Guin has met and surpassed it during a stellar career spanning half a century.

From the the wonders of Earthsea to the outer reaches of the Ekumen, Ursula Le Guin has given us some of the greatest stories of last hundred years, told with a sense of conscience and rightness unparalleled in the annals of science fiction. Anyone unfamiliar with her writing should do two things, immediately:

1. Watch her acceptance speech for the National Book Foundation’s Medal for Distinguished Contribution to American Letters.

2. Go and read one of her books!  Many of them are available via the Gateway and we are delighted to be able to include The Left Hand of Darkness in that number. 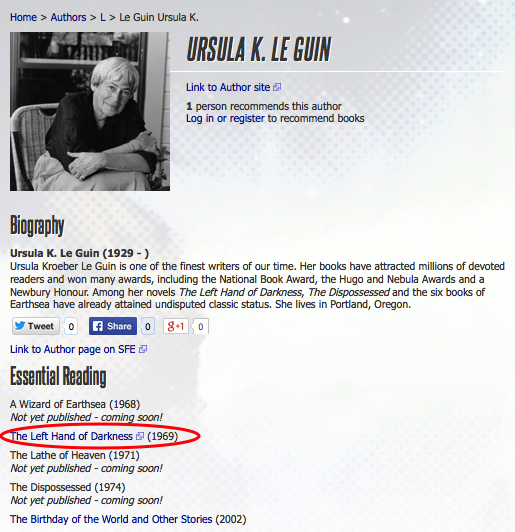