Like most of you reading this, I do have a penchant for recommending books I’ve enjoyed and that I sometimes think of as my pet discoveries.  One author I am particularly keen to draw attention to is Michaela Roessner, and especially her remarkable second novel Vanishing Point.

I enjoyed Roessner’s unusual debut, Walkabout Woman which pits a young aboriginal woman against both dangers within her tribe and the attempts to ‘civilise’ her by a white teacher.  I’d be interested to hear how native Australians view Roessner’s depictions of their culture, the Dreamtime and their lives, but the author appears sympathetic to my uninformed eye.  It is certainly an unusual work, with two strong female characters in competitive alliance.

More recently Roessner has published a pair of Florentine historical fantasies, The Stars Dispose and The Stars Compel, involving Catherine de Medici which are rich in detail (especially the food) and subtle magic.  It’s been fifteen years since the second of these, but there may be a third in the works which I know will please many. 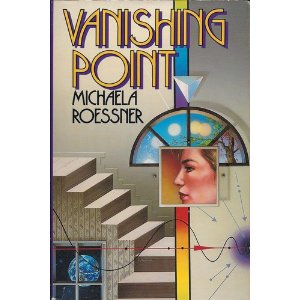 Good as these books are, Vanishing Point is something else again.  I defy you to come up with a post-apocalyptic scenario like Roessner’s.  Overnight, without warning, 90% of the human race vanished.  Nobody knows why – or where – they went, and why some were left but not others.  Now, thirty years later, the remnants of society have settled into enclaves and roving fanatics.  Communities struggle to make sense of the disappearances and to ensure both their survival and some feeling of hope should their families ever return.  One such community has colonised a real-life setting as remarkable as any in SF: The Winchester House in San Jose.  Originally a 19th century house, the owner became convinced that spirits were directing her to maintain building work night and day, non-stop, for the rest of her life.  Stairways going nowhere, rooms that are incomplete, stained glass windows that get no direct light and other building eccentricities have inspired several authors including Tim Powers, Alastair Reynolds, Alan Moore and others. I particularly thought of Heinlein’s short classic ‘…And He Built a Crooked House…’ but Michaela Roessner has taken on the house and expanded on it offering up a genuinely science fictional ‘explanation’ for the house’ mysteries.

The story itself begins with a loner setting fire to houses he considers ‘tainted’ by the post-Vanishing changes.  At the House, a young woman, Renzie, is part of teams rebuilding society and researching the Vanishing.  From across country the elderly woman scientist Nesta arrives with new theories and new approaches.  These two strong female leads offer leadership through physical strength and morality in Renzie’s case, and intellectual rigour and willingness to face the challenge from Nesta.

“The Vanishing didn’t just happen and stop.  We’re so overwhelmed and distracted by its psychological consequences that we can’t see its actual, physical effects. It started chains of events that continue, have maybe accelerated, that haven’t been examined except as possible clues to the Vanishing’s source.  We’ve got our heads buried in the sand and don’t even know it.”

Later in the same speech, “The effect is endemic on every level of reality.”  Most post-apocalyptic fiction defines one, maybe two, significant changes in society and environment.  Roessner recognises and insists on the bigger, more nuanced, picture.  The survivors of the Vanishing display myriad reactions to events, the range of symptoms associated with grief, guilt and anger.  Their relationships with their environment, friends, lovers and colleagues are not uniform. Society has changed but the past has not been discarded, some vehicles and technology remain, there are computers and communication tools though these are limited. Roessner sharply contrasts those who live and work together around the House with the more cultish groups who they interact with, particularly the Heaven Bounders who view the Vanishing as the Rapture.

Nesta’s research and her conversations with others also incorporate depths often missing in similar works. Theories are discussed, revised, disproved, and evolve. Through Nesta and the others Roessner draws on multi-disciplinary approaches both social and scientific to bring up questions as well as answers.  For me that makes Vanishing Point an important work of SF. Her thoughtful characters make it a fun, immensely readable and meaningful novel too. And the scientific answers she comes up with?  Well, no spoilers but Roessner’s speculation is grounded in knowledge of contemporary theories and contains enough detail to step beyond hand waving abstractions.    The House is explained with reference to, amongst other things, quantum physics, The Muppets, and Jorge Luis Borges.