This week’s SF Masterwork of the Week (anyone know another word for ‘week’, by the way? Using it twice in six words isn’t great practice…) comes from our current Author of the Month, the renowned Sheri S. Tepper. It is her 1988 opus The Gate to Women’s Country, of which The Encyclopedia of Science Fiction says:

Her first truly ambitious sf work was The Gate to Women’s Country (1988), which surprised some readers for the ferocity with which it imagined a Post-Holocaust world where social separation by Gender is almost complete, but where the supposedly meek women outmanoeuvre the really dreadful men on almost all grounds.

It is, at first glance, a kind of anti-Handmaid’s Tale; a novel of feminist SF set in a post-apocalyptic utopia, but that simplistic reading is a disservice to Tepper and the book is in fact much more, as Adam Roberts notes in his insightful introduction:

In fact Women’s Country is somewhere between a utopia and a dystopia.  Marthatown, though civilised, sophisticated and hospitable, is overshadowed by a pervasive sense of regret — we might call it a rue-topia.  The regret is dramatized early in the book as the mothers of Marthatown tearfully give up their five-year old sons to the army camp stationed outside the walls.  There the boys will be raised as soldiers.  They have the choice to return to Women’s country at fifteen, or else thereafter to dedicate themselves to the supposedly masculine arts of war.  Those who return agree to abide by the laws of the city, and are roundly mocked by their martial comrades as cowards and womanly men.  The remaining men work at war.  But it runs deeper than that, through the novel’s finely observed dramatization of the frustrations and remorse of young love, through to the ‘reveal’ at the novel’s end, when we discover just how deep the human sorrow upon which the city is founded goes. 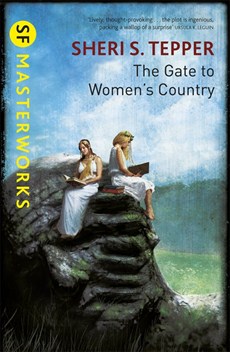 We are delighted to be publishing the Gate to Women’s Country in the SF Masterworks series, complete with a lovely Dominic Harman cover. It’s available as a paperback and eBook, and we hope it will be read an enjoyed for many years to come.