For many years, in my early days as a science fiction reader, James Blish was known to me for one thing only: he was the writer of the Star Trek novelisations I went through a phase of reading. I recall them being pretty good adaptations of classic Star Trek episodes, but certainly nothing exceptional enough to make me want to look up this Blish fellow and see what else he’d done. 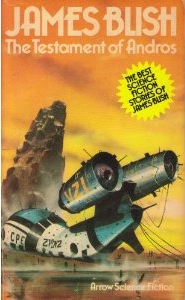 Imagine my surprise when I picked up a discounted paperback, attracted by some typically arresting Chris Foss artwork and the very science fiction-ie title The Testament of Andros, and found a familiar name at the top of the cover. It seemed this James Blish character wrote proper SF as well as tie-ins. Curious, I embarked on the collection – seeing as it was emblazoned with a flash proclaiming it ‘the best science fiction stories of James Blish’, I figured it should be interesting. And it certainly was!