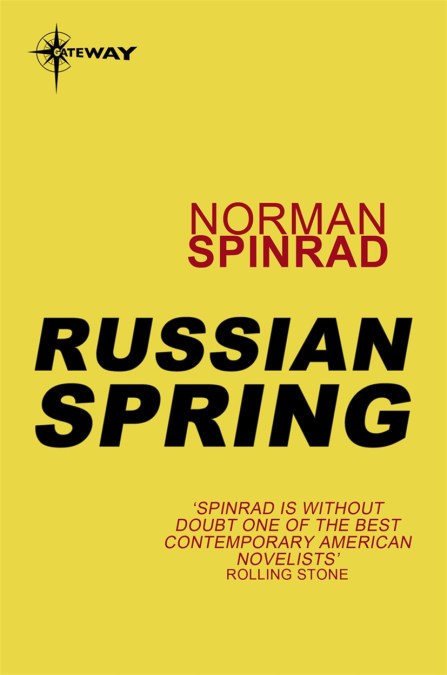 by Norman Spinrad
In the near future, the debt-laden U.S. owns a technology that renders it “the world’s best-defended Third World country.” The only real outer-space planning is in Common Europe, so young American “space cadet” Jerry Reed goes to work in Paris. He falls in love with and marries Soviet career bureaucrat Sonya Gagarin and the story jumps ahead 20 years, blending world events with a focus on their family. Sonya’s star has risen with the Euro-Russians’ while Jerry has been stymied by pervasive anti-Americanism. Daughter Franja has her father’s space fever and enrolls in a Russian space school; son Bob, fiercely curious about an earlier, admired America before it was run by xenophobic “Gringos,” enters Berkeley. Ten years later the U.S. is a pariah, Euro-Russia the pet of the civilized world and the Reeds scattered – politics forced Jerry and Sonya’s divorce, Franja speaks only to her mother and Bob is trapped in “Festung Amerika.” A series of odd, occasionally tragic events brings the family (and the world) together. Despite some tech-talk this is not science fiction: the first two-thirds of this hefty book is chillingly logical, if sometimes very funny, and while the “happy” ending may seem forced, Spinrad ( Bug Jack Barron ) gives us a wild, exhilarating ride into the next century.