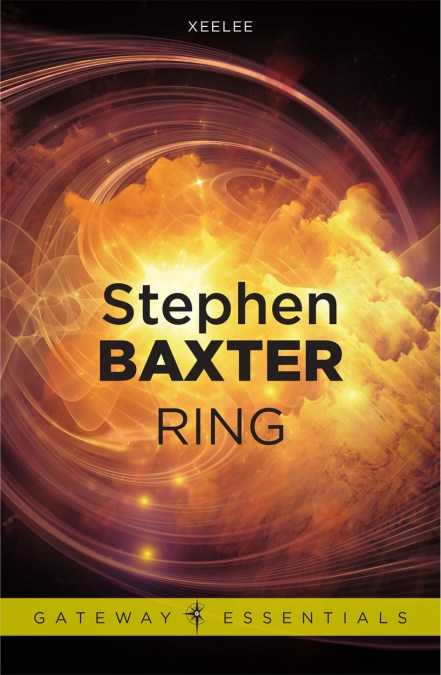 by Stephen Baxter
Wormhole technology has revealed that our sun will die in 5,000,000 years. A race of superbeings, the fabulous Xeelee, owners of the universe, are thought to be responsible. The bizarre and wealthy cult, the Superet, funds two projects aimed at combatting the force that will murder the sun. 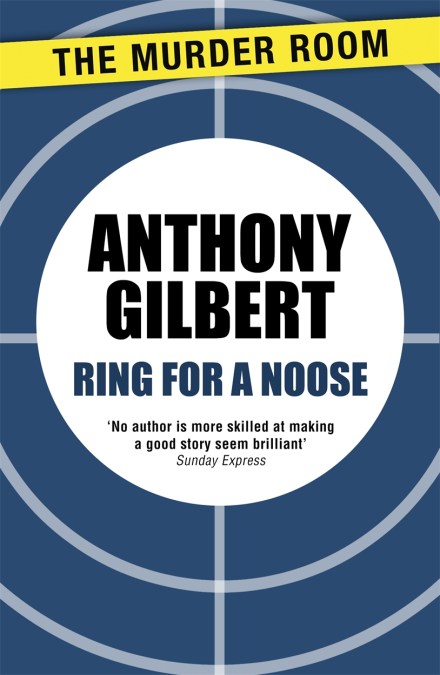 Ring for a Noose

It is at a local watering hole, the Duck and Daisy, that lawyer-detective Arthur Crook happens upon a party of men and women calling themselves the Peace Brigadiers. Their mission is to aid refugees from Europe.

But it isn’t long before Crook suspects one of them is using the premises for criminal ends. And when murder strikes Crook becomes entangled in a treacherous plot . . . 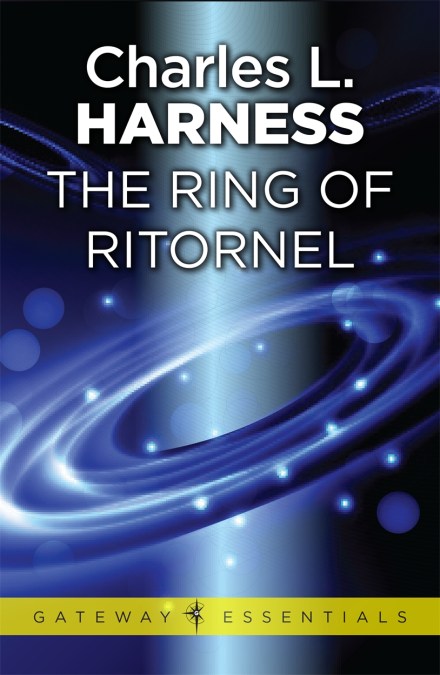 by Charles L. Harness
A science fiction novel of revenge and retribution set against a background of galactic civilisations. 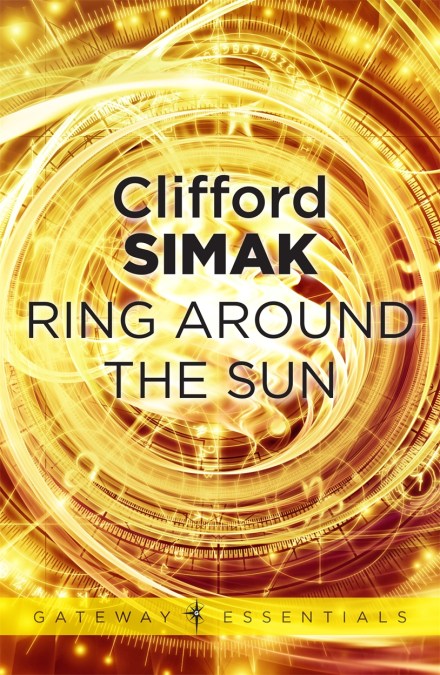 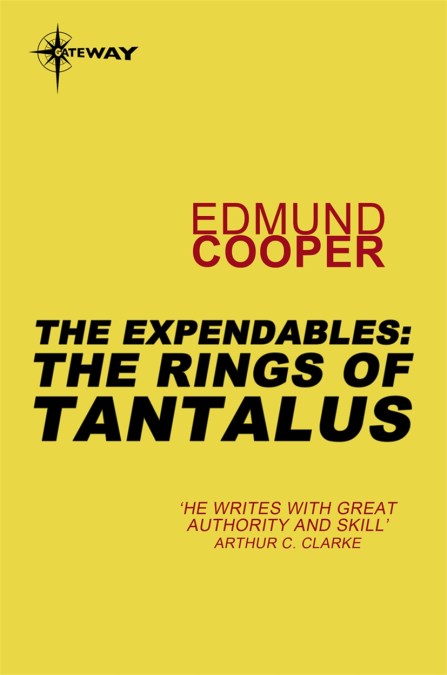 The Expendables: The Rings of Tantalus

by Edmund Cooper
First they went to Kratos – and faced the Deathworms. Then they went on to Tantalus and tried to fathom the Rings – which could only have been fabricated with the help of highly sophisticated machinery.

And then they discover an alien spaceship orbiting the planet in strict silence and incommunicability.
When they finally boarded the vessel, it was obvious that it had been derelict for centuries – as a result of some dreadful battle. Meanwhile down below, the enigmatic Rings lay waiting to deal with intruders – as they did the deadly vampire tree. Once again, Commander James Conrad and his team of Expendables faced their mission to find planets suitable for colonization.

The second of a new series of books, The Rings of Tantalus seems guaranteed to further launch Richard Avery as a very special writer of modern science fiction novels. And there are more to come. 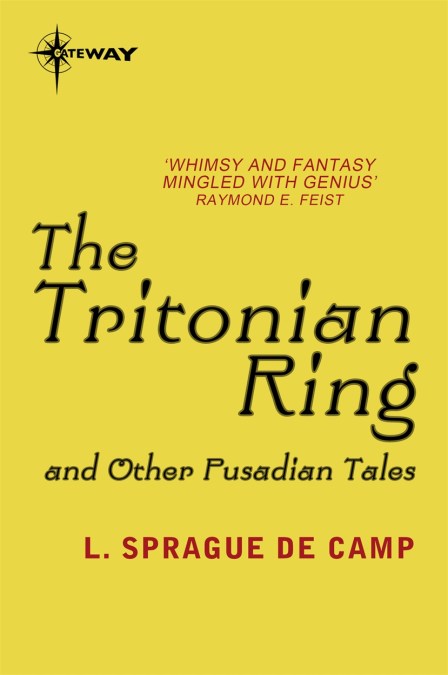 The Tritonian Ring and Other Pusadian Tales

by L. Sprague deCamp
The gods of Poseidonis – or Atlantis – were powerful and real. Now they were determined to destroy the kingdom ruled by the father of Prince Vakar, the one man whose mind they could not read. The only way to save the kingdom was to discover that thing which the gods feared most.

To find it, Prince Vakar set out across the largely unknown world where dangers multiplied with every league. There he found savage countries and strange people – the wild Amazons; a voluptuous, ensorcelled queen; a too-charming girl who was half-horse, half-woman; dangerous magicians who ruled hordes of headless slaves; and the Gorgons, who could paralyze their victims at a glance.

Behind was his ambitious brother, determined that Vakar must fail. Even closer were unknown enemies set on his trail by the suspicious gods.

And to add to his troubles, Vakar had no idea of what he sought! 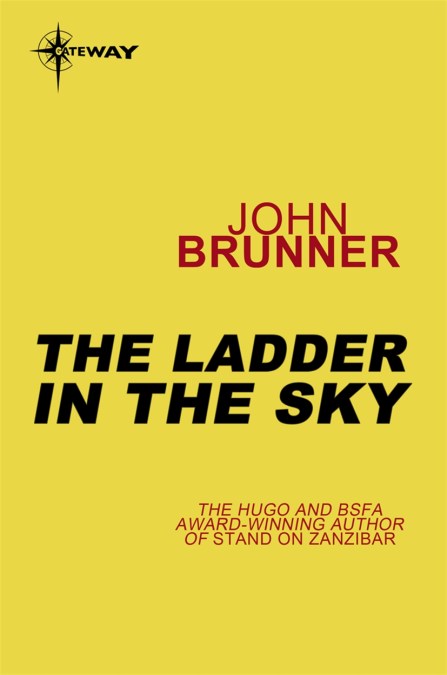 The Ladder in the Sky

by John Brunner
The man in black picked up something which had been leaning beside him. A ring perhaps two feet wide . . . yet when the man in black laid it down on the floor it was as large as he was tall.

The light went out. A bluish glow now emanated from the ring, revealing Bryda’s face ghastly gray as she leaned forward, and Yarco’s also, set and serious, and the conjurer’s impassive.

And within the ring, where moments before there had been the bare planks of the floor, a shape that moved, and opened eyes glowing like coals, and spoke.

‘What world is this?’ the awful voice inquired. 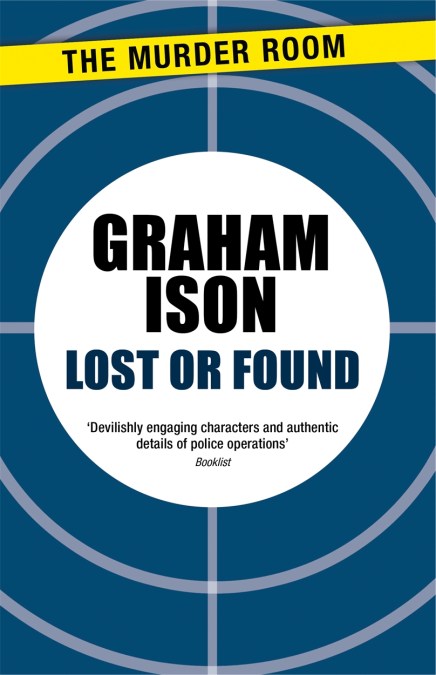 by Graham Ison
A wedding ring, a missing woman, a bizarre disappearance…

When Eunice Bailey takes her wedding ring to a London jeweller to have it enlarged, she is very keen for it to be done quickly. She is a reliable and favoured customer and when the jeweller is unable to get in touch with her to collect the ring, he contacts the police.

Detective Chief Inspector Brock and Detective Sergeant Poole are assigned to the case, and what begins as a fairly simple missing person enquiry develops into a mystery that has ramifications stretching as far as Bermuda . . . 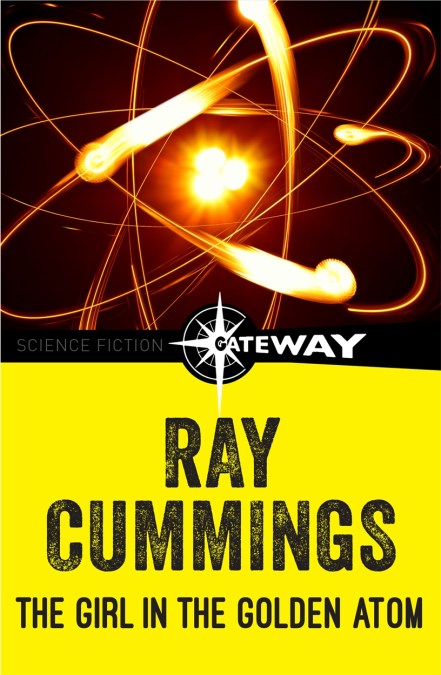 The Girl in the Golden Atom

by Ray Cummings
The Girl in the Golden Atom is the story of a young chemist who finds a hidden atomic world within his mother’s wedding ring. Under a microscope, he sees within the ring a beautiful young woman sitting before a cave. Enchanted by her, he shrinks himself so that he can join her world. 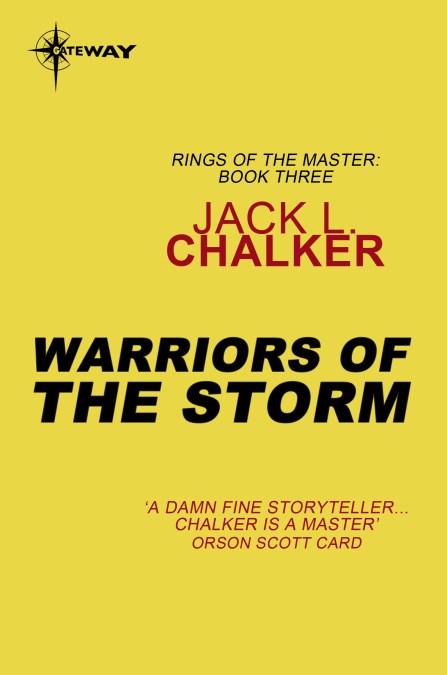 Warriors of the Storm

by Jack L. Chalker
They were Thieves for Freedom.

The golden ring – a sacred object to the inhabitants of Janipur – was one of five. Together they were the key to control of the Master System and the only hope of humanity taking charge once more of its own destiny.

Hunted through the galaxy, the rebels’ chances of survival, let alone success, were desperately slim. The three had been transmuted into Janipurians – four-legged, hairy creatures – and had infiltrated the complex, ritualised society of this long-ago terraformed planet.

And with them was Vulture, the artificially created shapechanger who could become, in body and mind, any organic creature. Vulture it was who now watched the solemn ceremony as the ring was brought out and displayed to the crowd, who understood that not just the Master System but the whole population would be hunting down the stealers of the ring. 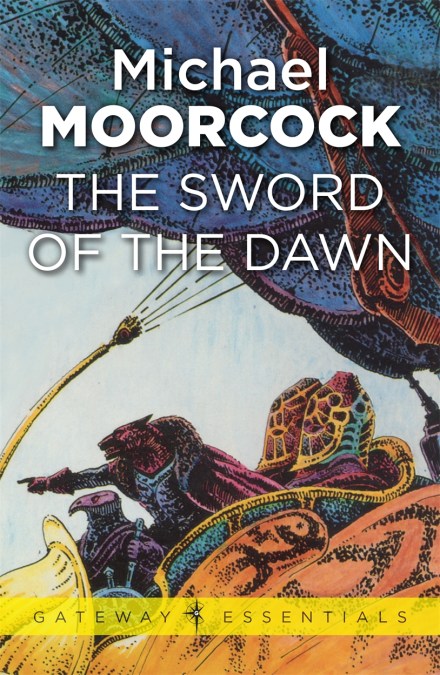 The Sword of the Dawn

by Michael Moorcock
Duke Dorian Hawkmoon’s quest to destroy the Dark Empire of Granbretan leads him onto the path of a man who possess a rare ring that allows men to travel through time. Hawkmoon uses this ring to travel to a far future New Orleans, where he must battle the Pirate Lords who possess the Great Sword of the Dawn, which can end the Dark Empire once and for all. 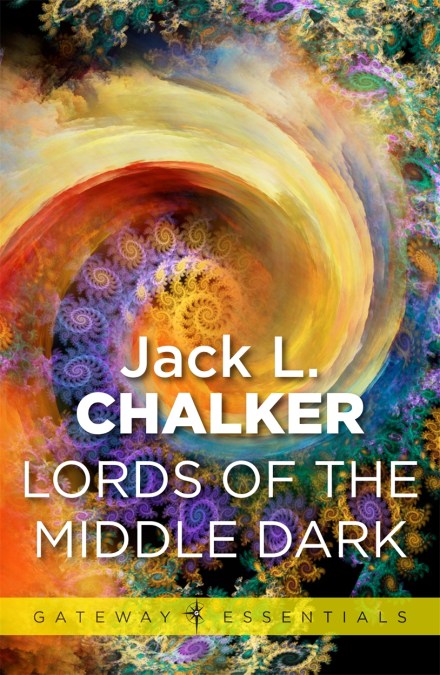 Lords of the Middle Dark

by Jack L. Chalker
Across the galaxy and beyond, he Master System ruled. Once the product of human intelligence, it now far surpassed its creators. All understanding of it was lost and any attempt at rediscovery ruthlessly suppressed. The rule of the Master System was unchallenged.


Yet there was a key, long forgotten, that would break that control and it happened by chance that two people, an American and a Chinese woman, stumbled across the secret of the five golden rings that were the key.


Now their only hope lay in finding the rings themselves for the Master System was at their backs, hunting them down… 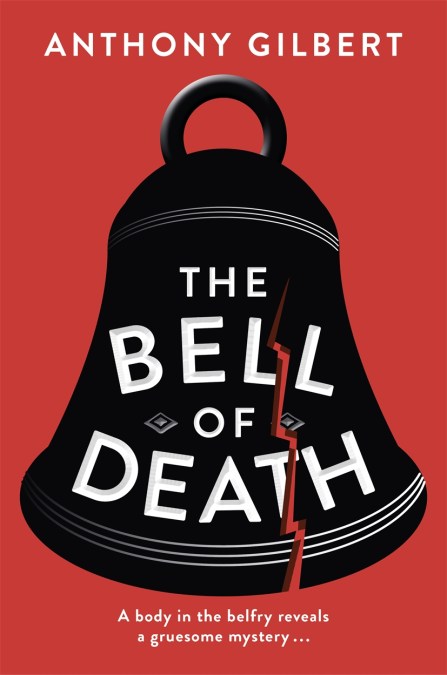 The Bell of Death

by Anthony Gilbert
A body in the belfry… and a gruesome mystery to uncover for the inimitable Crook and Parsons.
Classic crime from one of the greats of the Detection Club

The bell of St Ethelburga’s had stopped ringing. It had pealed out its customary call to the faithful, its gentle reproach to the sluggards; but somehow that morning it did not seem to ring as long as usual. For Death had been busy in the belfry, where a startled vicar made an appalling discovery.

The murder in the church begins another mystery for the inimitable Crook and Parsons, who shine with their trademark ingenuity and impudence. 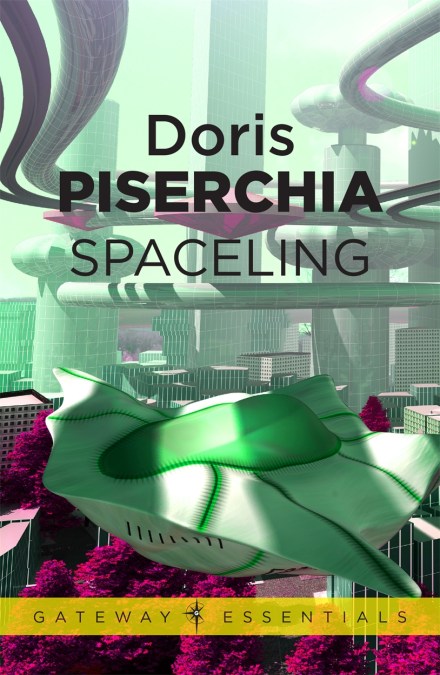 by Doris Piserchia
The ability to see other-dimensional rings that float in Earth’s atmosphere was a late mutation of a few space-age humans. Daryl was under the care of the institution for muters, and she had discovered that if you jumped through the right ring at the right time it would land you in another dimensional world and another shape.

Spaceling is the story of Daryl’s desperate efforts to unravel the mystery of why she was being held captive and of what was really going on in a certain alien dimension. Because she was sure it was all bad and that someday everyone would thank her for the revelation.

But instead everyone was engaged in a wild effort to hold her down, to keep her on this Earth, and to keep the world simply intact! 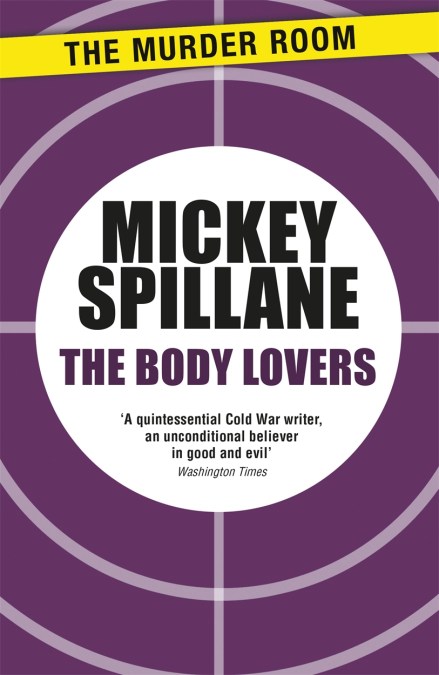 by Mickey Spillane
PI Mike Hammer is moving through the dark streets of New York City when he hears a child’s terrible scream. When he finds the child, he also discovers the naked body of a beautiful woman who has been beaten to death with a whip.

So begins a complicated and baffling case, involving the deaths of other women and a newspaper reporter, who was tracking aspects of the case as well as following the lives of the city’s prostitutes. Mike uncovers a sadistic ring of international figures, where women risk their lives for a fortune in an attempt to pull themselves out of despair.

Can Mike, with the help of his beloved Velda, break the ring that is crushing the lives of vulnerable women?
Next Page